C is for Candy Corn

Oooooh, I was so excited for "C" day!

Every fall, when August turns to September, I religiously do two things.  First, I put up leaf garland on all of our banisters and railings, and second, I make a delicious snack mix with fall candy.  As of today, there still isn't garland hung, but you can be certain we have our snack mix made!!

The kiddos and I went to Kroger right after breakfast to get the supplies. . .it was VERY important that we go to Kroger because they have these awesome little shopping carts.  As long as I don't need much, AND as long as the store isn't crowded, I let Mason be in charge of our purchases.  He's not very reliable, nor very coordinated (which explains why we only do it in an empty store!), but he thinks it's a blast.  Sadly, Kroger had neither candy corn nor Halloween M&Ms, so we basically accomplished nothing except pushing a miniature cart haphazardly around the store for 30 minutes.  Oh well. . .30 fewer minutes to fill!!! 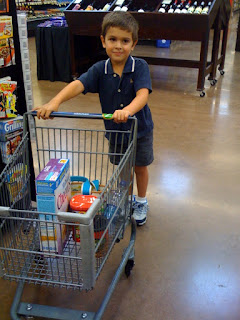 Thankfully, the Walgreens right across the street had everything we needed.  Last year, I couldn't find any candy corn to save my life, so I had to have Lara send it to me from Denver.  I know, that sounds reeeeeDICulous, but what else was a girl to do?  This mix is seriously that good. 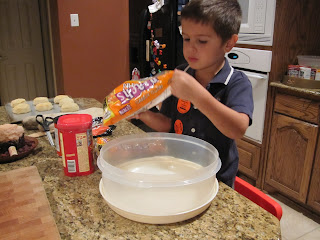 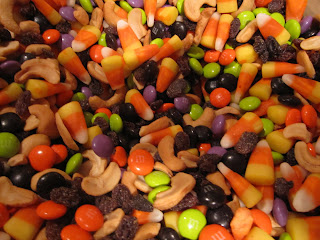 *two bags Halloween M&Ms
*two bags Brach's Candy Corn
*one large can cashew parts and pieces
*about half a large container of raisins
*employ four-year old to pour and stir, then devour!

And, to add to our lesson for the day, Brody Boo wouldn't stop CRYING.  He is the most rotten child on the planet.  I have no one to blame but myself because I always cave in and pick him up when he goes ballistic, but it's rather unbearable if I don't.


Oh, and the longer you let the snack mix sit, the better it gets.  The cashews make everything else kind of salty and greasy. . .oooooooh, it's goooooood!
Posted by Kristen at 8:10 PM