D is for Disco

Ummmm, what??? I know. Sounds strange. But bear with me, and I will actually get to the educational part of this post. Just not right away! So, last weekend was Christina's birthday party. And she wanted a 70's disco party. Boy, did she get it! All attendees had to be in costume, and we boogied the night away. Check out the birthday girl, her family, and The Rays. . .as well as the "club" formerly known as the living room! 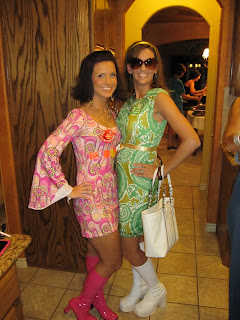 Right after this was taken, someone said we looked like "Stepford Wives." Hah! 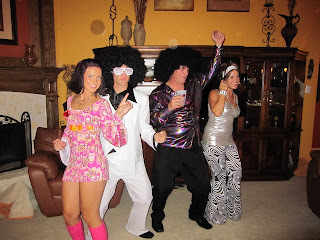 The Pickering Clan, in all their glory! 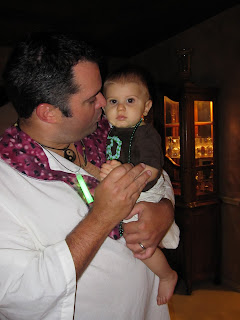 Rip went for the "John Lennon, Give Peace a Chance" look. He had the perfect accessory in Brody, too. . .

And then, there was Mason. Here he is, doing his version of disco. He was a dancing maniac all night. He and Christina made the shirt as one of their projects last week!

So this is where I got my idea for our "D" lesson. We started with "D is for Disco." Which migrated into "D is for Dancing," which turned into a search on iTunes for music that Mason liked. Loving the Laurie Berkner Band for him right now! (Focus, Kristen. Focus!)

I let Mason practice writing the letter "d" on a whiteboard for something different. Which he thought was fun for about 3 minutes. Then he wanted to tell me words that started with the letter "D." The second word out of his mouth was "Delbert," which was hilarious. He said "Daddy calls me that sometimes, you know." Wow, he cracks me up!! 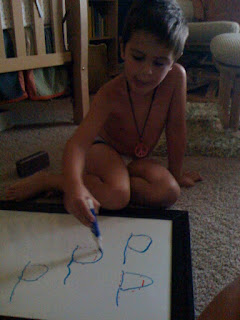 Peace, dude. And maybe put on some clothing next time.
Posted by Kristen at 7:57 PM