According to the State of Tennessee. . .

According to the slogan of the State of Tennessee, the state represents "America at its Finest."  I think you'd be hard-pressed to argue with that.  We arrived here on the second day of our big road trip adventure, and here's what "they" had that we liked. . .
For one, "they have" Daddy.  AKA Mr. Rip Ray, husband and father extraordinaire.  He had been living in a corporate apartment since June while we were back in Texas. The kiddos were missing him so much by the time we arrived in Nashville, they were literally hanging over the balcony rail, waiting for him to come home from work. 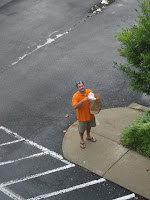 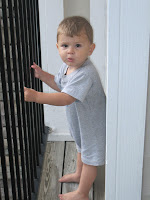 "They" also have the Tennessee Titans!  And because Rip's Aunt Sharon is Jeff Fisher's assistant, the boys got to go to training camp and play around with the players and their kids on the practice field.  Fun stuff! 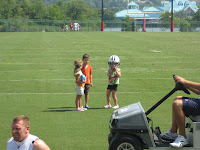 Because there were four of us in a little corporate apartment designed for just one person, we had to get out and about fairly often to keep ourselves sane.  So here's what else we got into during our week in Nashville: 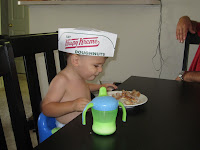 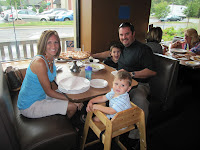 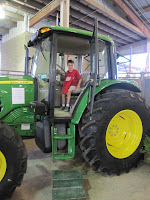 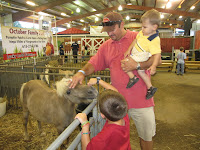 the petting zoo
At the end of our week in Nashville, we were a little sad to leave Rip, but we had a plan:  one week in Indiana visiting my parents, a few days in St. Louis to see our friends The Whites, then BACK to Nashville for a long weekend before heading back to Texas in time for Mason to start Kindergarten.  ﻿Oh, how I love a good plan!
﻿
﻿
﻿
﻿
Posted by Kristen at 9:34 AM