We've been talking about taking Mason to the dentist for, oh, I dunno. . .like a year. And somehow, I just never managed to get the appointment scheduled. Something more important always came up and took precedence. You know. . .like doing the laundry or working or watching the Today Show (did I just say that??!!). Okay, so maybe I was avoiding it a little.

But eventually, I got the appointment on the books and we started talking to Mason about the dentist. With a positive spin, of course. And lemme tell you. . .he couldn't wait to go! He was literally jumping up and down like a pogo stick at the front desk when we got there. Telling everyone his name (boing!) and that he was four (boing, boing!) and that he was having a DENTIST APPOINTMENT (boingboingboing!). As usual, all were charmed. Or else they acted charmed, then rolled their eyes and felt sorry for me when we turned our backs.

We went into a little administrative office first, which is where Mason first caught wind of the fact that perhaps going to the dentist wasn't all it was cracked up to be. The office manager was asking me a slew of questions, which was totally fine, until the zinger. "Are you nervous?" she asked me. You'd think a pediatric dental office would know better. Well, Mr. Perceptive over here clearly didn't miss that. He walked out of that little room, flattened himself with his back against the fishtank, and said "I'm nervous," while refusing to move. Awesome.
It took about 10 minutes of coaxing, talking to him about all the hygienists' Crocs and Jibbitz, talking about the fish and their names, bla, bla, bla to get him to agree to go to a chair. I was actually starting to worry I'd have to pick him up to get him to move, which would have been disastrous. Thankfully, he got a burst of bravado and walked to his chair. He almost bolted when he saw ladies wearing scrubs and masks, but we diverted his attention ("Hey, do you think Nemo's daddy lives in that tank over there there, too?") and marched onward. 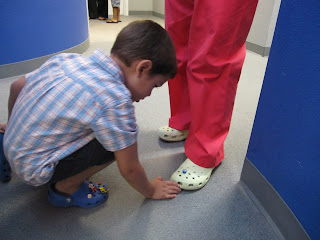 From that point on, the appointment was awesome. I have to say, Dede did an amazing job at talking to him about the equipment, giving everything cute little names (for example, the saliva-suction-thingy was "Mr. Thirsty"), and letting him touch and play with everything. I think the fact that "Monsters, Inc." was playing on the TVs on the ceiling probably helped, too! 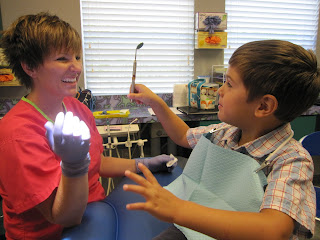 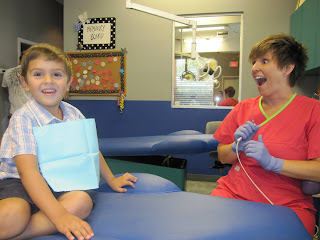 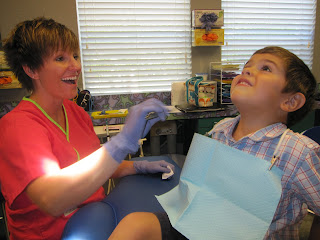 He left with a grade of B+ (my fault. . .we need to floss), an x-ray of his permanent teeth (can you say "braces?"), a zebra toothbrush, a pirate mask, a picture he colored (for Daddy), and an airplane toy. 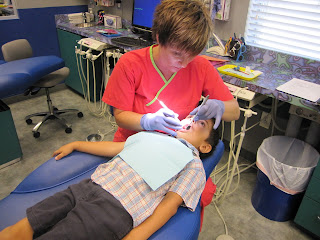 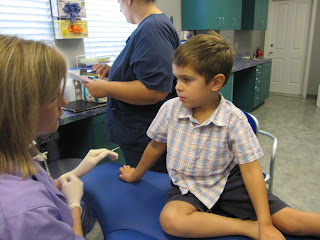 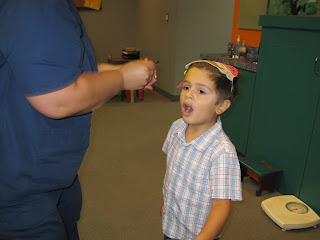 And he made a new friend in Dede the dental hygienist!